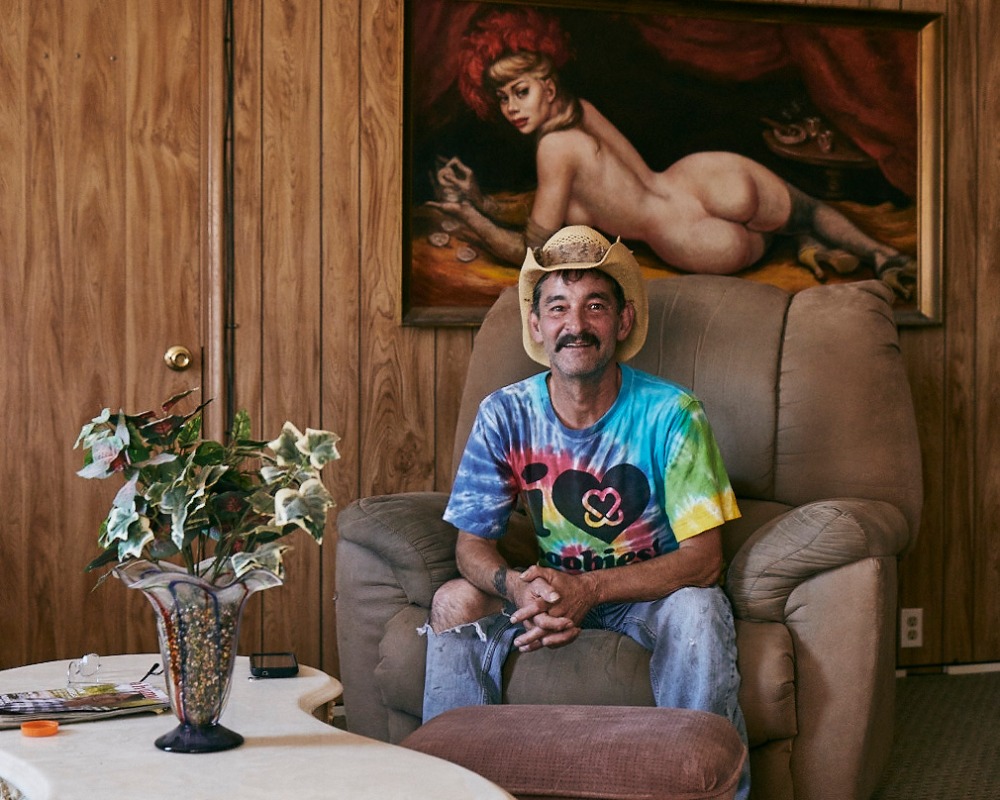 In autumn 2017, I met Mike Peters at a bar in Beatty, Nevada, with photographer Myles Pritchard, who is a master of meeting colourful characters in bars.

We meet Mike Peters in the kind of place where you meet guys like Mike. We’re drunk, at a bar called the Happy Burro, in Beatty, Nevada, a down-at-heel mining town in the desert a little north of Death Valley. The Happy Burro is a brilliant place: a faux-Western saloon that serves cold beer and deliciously filthy chilli dogs to some of the town’s thousand or so souls, plus assorted, mostly young tourists on their way to and from Death Valley.

There’s a barmaid at the Happy Burro called Kitty Divine, who has tattoos and a mysterious backstory, and who only reads books about meditation and spirituality. When, close to midnight, the whole bar rushes to the room next door to sing happy birthday to one of the locals, Kitty demurs, because singing happy birthday isn’t really her thing. No one seems to keep track of our bar tab.

Myles, the photographer, is the first to talk to Mike, and at first I’m only half paying attention (I’ve been talking to a guy from Arizona who recently left his Mormon religion and his marriage, and has been touring the West on his Harley-Davidson). But I start overhearing little snippets: a parachuting contest, call girls dancing round a mattress, a crashed plane outside a brothel…

Mike has puppyish brown eyes, a moustache and is wearing a cowboy hat and a tie-dye t-shirt that says “I love boobies” on it. He is very animated, and is clearly enjoying having a rapt audience.

Soon, Mike is handing us the cheaply produced business cards of an alien-themed brothel south of town. The Alien Cathouse is run by Dennis Hof, whose election flyers happen to be lying around in a corner of the bar. Hof is the Nevada brothel magnate whose most famous creation is the Moonlight BunnyRanch near Carson City, and who is running for a Nevada Assembly District 36 seat in 2018. His flyers show his smiling face, under a white cowboy hat, and read simply: “I can’t be bought!”.

The alien brothel is merely a weekly distraction, though, from Mike’s main preoccupation. The Angel’s Ladies is a derelict brothel a few miles out of town that closed in 2014. Mike is helping Joe Rosenberry, an old friend from Oregon, turn the site into an RV park and nudist camp, with the latter element of this new business venture primarily based on the fact that “lots of German tourists come to Beatty”.

In 1978, a small twin-engine plane crashed right next to the Angel’s Ladies sign. No one knows exactly why, but Mike tells us the most popular story… that the pilot was distracted by prostitutes dancing round a mattress during the annual skydiving competition (the game went that the closest skydiver to the centre of the mattress would have his pick of the ladies). After the plane’s wing clipped the mountainside, it almost ploughed into the mattress, and has been there ever since, becoming a kitsch road-side attraction and a site for photoshoots.

“There’s also a theory that the plane was taking a bunch of Chinese guys back to Vegas who’d been staying at the brothel,” says Mike. “But, hey, I like the other story better.”

Mike agrees to meet us the next morning, and we wait for him next to the plane, which is covered in graffiti, and the decaying yellow sign. We’re feeling a little worse for wear, and when Mike pulls up and jumps out of a friend’s truck, he’s still wearing last night’s clothes. But he’s just as animated, telling us how his night ended with an encounter with a burro (a small wild donkey that thrives in the desert)… “I was pouring beer into his hoofprints, which he’d lick up… he followed me for half a block, and we had two beers together.”

For all that he might enjoy the odd brothel visit, Mike seems like a genuine and decent human being. While he’s posing for our photos, and showing us around the 70-acre property, he talks a lot about his family, particularly his grandchildren. He’s here helping his old friend renovate the brothel out of loyalty rather than any real financial gain. “It makes me happy to make Joe happy,” he says by way of explanation.

Mike – who once worked in the paint department at Boeing, but now runs a body shop in Oregon City – has been busy clearing out the area behind the brothel and helping install a swimming pool, along with a few other friends and hired hands who come and go. He comes down to Nevada three times a year, working for a month and a half at a time. “We want to bring the light back to this place, which had a real dark cloud over it,” he says.

Certainly, there is a bit of darkness about the story of the Angel’s Ladies. In 1997, it was bought by Mack Moore, who had run four funeral homes and six cemeteries in Oregon, before leaving amid a swirl of rumours of missing corpses and bodies exhumed on the sly. According to an article in Harper’s in 2002, 18 complaints were filed against Moore with the Oregon Cemetery and Mortuary Board between 1992 and 1994. He allegedly fled the state after a final controversy, though state confidentiality laws mean that what really happened has never been made public.

Either way, Moore had bought Fran’s Star Ranch brothel, changing its name to Angel’s Ladies, after his wife Angel, and claiming he’d turn it into a “desert paradise, an oasis”.

According to Mike, it was no paradise. “Mack was a real shyster,” says Mike. “There were always rumours about what had happened back in Oregon, and about how he treated the girls here. He was a funny old guy, but there was a darkness about him. He definitely wasn’t someone you could trust.” Moore retired and closed the business in the summer of 2014. He was 86, and little has been heard of him since.

Mike shows us round the brothel building, which is flamingo-pink on the outside and dark on the inside, all brown carpets, dark wood, stucco ceilings and furniture that could have come straight from 1971. When he’s in town, Mike sleeps in one of the 12 or so dingy bedrooms, and tells us that when there are no workers there the site is overseen by Sherry, a former prostitute who never left.

On one wall in the foyer area – with its plastic plants and piles of VHS tapes – is a grotesque caricature, supposedly of Mack, flanked by two prostitutes, painted in a sort of faux-Baroque style by a local artist called Alan, who would supposedly paint “in return for action”. In it, Mack has an oversized chin and man-breasts; none of the three characters in the painting are interacting. On the other side is a portrait of a coquettish woman, which Mike thinks could be Sherry. “If these walls could talk…” Mike muses to himself, quietly.

As of yet, there aren’t concrete plans for what will be done with the building; how it will go from a place of stifling darkness to a place where, if all goes to plan, cheery Continental nudists will play volleyball by the pool and take in the shimmering desert sunset with a piña colada.

However shaky that proposition sounds right now, it sounds a whole lot more promising than what’s happened at this strange, claustrophobic place. After a few minutes inside, we’re desperate to get out, into the sunlight and onto the open road.