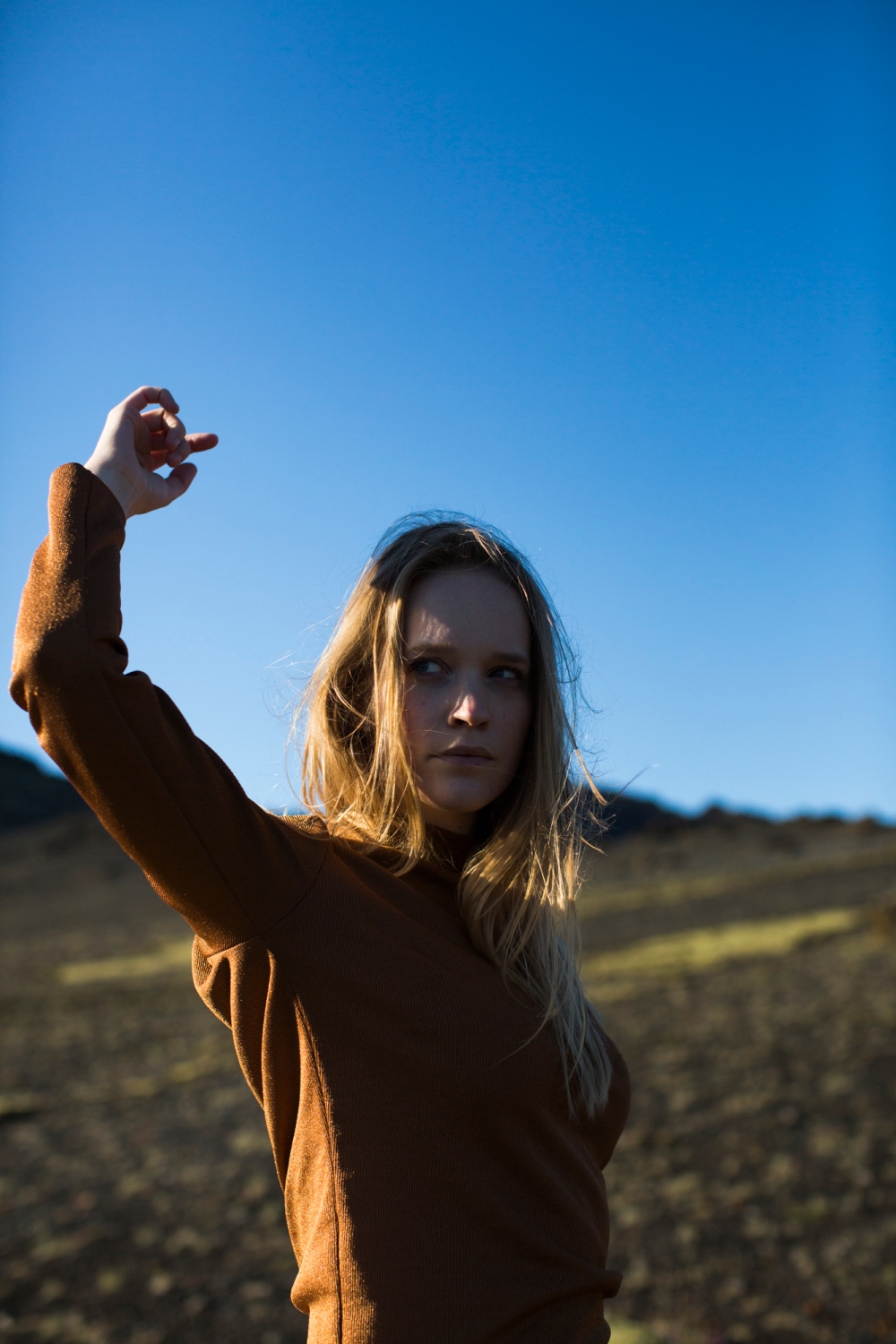 I met Melkorka Sigríður Magnúsdóttir in August 2017, with photographer River Thompson, while doing a story about Icelandic acts at the Airwaves Festival.

Melkorka Sigríður Magnúsdóttir, the frontwoman of dance-pop duo Milkywhale, might just be the perfect interviewee and shoot subject. On a Monday in Reykjavík, in early August, I text her saying that River the photographer might like to shoot her against some white steam, and perhaps against a more Earthy backdrop (we’re trying to shoot Icelandic musicians against pretty, Icelandic backdrops). So could she maybe bring a white outfit, and maybe a sort of brownish one?

When we meet at Reykjavík Roasters, a hipster-minimalist coffee shop just down the road from the famous church, Melkorka’s not only perfectly on time but has a large holdall, filled with clothes. “Will these do?” she asks.

Then she directs River to the Krýsuvík geothermal area, just under an hour south of Reykjavík, easily outperforming Garmin the GPS, who has been having a torrid time trying to pronounce Icelandic street names. She leaps out of the car, and when we’ve found the spot, gamely steps off the boardwalk onto the brown lava, and transforms from nice, bubbly Melkorka into Milkywhale: Dancer, as the steam rises evocatively behind her.

When she takes a pause from her strangely hypnotic swaying, River mentions that the shots he’s taking are looking great. “Yes!” she exclaims, doing a little fist-bump, and suddenly looking less like Kate Bush and more like Judy Murray.

Melkorka is a classically trained dancer and choreographer, who studied in Amsterdam and Brussels and has worked on all kinds of dance projects across Europe: from her award-winning work with Icelandic performance group the Samsteypan Collective to working with Belgian choreographer Wim Vandekeybus, and dancing in his avant-garde piece, Radical Wrong. She’s been the chairman of the Icelandic Dance Association and used to sit on the board of the Federation of Icelandic Artists.

She’s often used pop music in her choreography, and has dabbled with music. She played the synth and the banjolele, and sang, in a group called John the Houseband, a group formed in Amsterdam, which describes itself as “not a band in normal terms, but an art project”.

If all that sounds a bit high-brow, Milkywhale is anything but. When they formed in 2015, Melkorka had been inspired by seeing Robyn at Airwaves, the biggest music festival in Iceland. “I was just blown away by her energy, and how much she owned it. She didn’t care, she just performed, and something about it spoke to me.”

So, her idea for Milkywhale was essentially a blast of pure pop, “but still exploring that idea of expanding what a concert is”. She roped in Árni Rúnar Hlöðverssson, of FM Belfast, a joyous electro-pop band who regularly tour Europe. “I was kind of an FM Belfast groupie,” says Melkorka. “I told Árni it was a dance project. Then, when he was in, I broke it to him that we’d be doing pop songs. It was my way of sneaking into the music world.”

Árni took charge of the beats, while Melkorka did the melodies and the lyrics, helped by her mother, an acclaimed Icelandic novelist, who would write little poems to inspire her daughter. Between them, they formed the concept of the band – inspired in part by a real-life whale that sings on a different frequency to other whales, so can’t be understood. “Milkywhale is a kind of world,” says Melkorka. “It’s about love, loneliness, and trying to connect. But there’s also a humour and joy to it.”

Still, Milkywhale live shows sound a long way from lonely whales. At their first gig, at the Reykjavík Dance Festival, Melkorka remembers standing in front of a huge screen. “I just started moving,” she says. “It was like coming home.” The crowd went wild, and when they played the Airwaves Festival a few months later, they were widely dubbed the breakout act of the year.

Melkorka is candid about the joy of being on stage, being able to put hands in the air on command. “We’re all attention-seekers, really,” she says. “I just love having this kind of crowd control, where you can create this communal experience. We want people to come out of our shows happier than when they went in. It’s a bit like laughter yoga.”

We want people to come out of our shows happier than when they went in. It’s a bit like laughter yoga.

I’ve not been to a Milkywhale gig, but everyone we speak to says they’re great fun. Local ’zine The Reykjavik Grapevine described their retro aerobics-inspired show at the 2016 Airwaves Festival as: “A bowl of Skittles combined with eight double espressos, topped with the mania of receiving both a new puppy and a trampoline on Christmas morning.”

Their recorded songs so far fit the “lonely whale” idea a little more clearly. “I want to meet you” goes the refrain in ‘Birds of Paradise’, their biggest song to date. Milkywhale music videos – which are directed by Melkorka’s boyfriend, Magnús Leifsson – tend to start slowly, but by the end Melkorka is generally showing off her moves. “I prefer silly to sexy,” she says of her dancing, which could perhaps be described as ‘ballet dancer gone rogue’.

Still, despite quickly becoming one of the cult shows in Iceland, Milkywhale haven’t truly made an impact outside the country yet. Unlike, say, Icelandic hip-hop acts, the whole thing seems eminently exportable. Melkorka seems like a ready-made star, with just enough Icelandic arthouse quirkiness about her, and you can imagine them smashing it at festivals.

For now, it’s nice that she’s not a superstar. We spend an hour or so shooting her against the geothermal steam vents at Krýsuvík, and then in the otherworldly landscape around Lake Kleifarvatn, nearby. Melkorka is constantly obliging, and a good laugh, but snaps into character as soon as the camera is on. Everyone’s happy.

And, for now, you sense that she doesn’t need much more. She’s still working on theatre dance projects, including a show next April with a group of Icelandic singers, dancers and musicians, which will explore the connection between choreography and music.

As for Milkywhale, for Melkorka it’s about the simple joy of performing, and it doesn’t seem to matter too much whether she’s on the Pyramid Stage at Glastonbury or performing for a bunch of kids in an Icelandic town hall (like many Icelandic acts, she does shows for children).

It’s all about that buzz. “It’s like being a high priestess,” she says. “Preaching pure joy.”

Listen to Milkywhale, and find out more, here.

Nikka Myren Grønning has three words of English, but they're pretty good ones: "I love you". When we met in 2016, 99-year-old Nikka chatted away despite severe translation issues, while using a traditional mould to make her crisp signature wafers, which they serve at the super-cool Juvet Landscape Hotel up the road. She's lived in the same farmhouse in the Valldal Valley in central Norway since the War, when she would sneak supplies out to Russian soldiers who were fleeing the Nazis. She's since hit three figures, becoming a minor celebrity in Norway for her baking recipes—and I can only assume she's still a badass with a cheeky glint in her eye. Read the full story at peoplewemet.org (link in bio), with photography by @riverthompson
When @timewhitephoto and I met Santa in 2014, at the Kakslauttanen Arctic Resort in Finnish Lapland, he was having a tricky time- Mrs Claus was shopping in the Maldives, and he was living on pizza and coffee, which weren't helping his insomnia. Still, Santa has some proper tricks up his baggy red sleeve. His elves can make iPads using local gold and magic powder, and he can remember every kid he's ever met- including Tim, whom met him in an Essex department store in the 1970s. Read the full story at peoplewemet.org (link in bio). And have a very merry Christmas, all.
Stories aren’t exactly in short supply at the Fisherpoets Gathering in Astoria, Oregon, when a hundred or so commercial fishermen read poetry, sing songs and tell tall tales of life on the seas. But few, surely, can hope to match the storytelling chops of “Dangerous” Dave Densmore – who was the youngest king crab skipper on the Bering Sea, off Alaska, at 23; who survived four days on a tiny life raft in a violent storm in 1971; and whose father and son died in the same fishing accident in 1985. Dave has some stories. Read mine about him at @peoplewemet (link in bio), with photography by @maltejaeger.de
It's fair to say that Icelandic hip hop trio Cyber like to talk – about trampolines, cheap fast food and what Icelandic teenagers really get up to in the Blue Lagoon; but also about stuff they care about, like gender equality and good music. The trio got together as part of the Reykjavik's Daughter hip hop collective, an all-girl juggernaut of provocative live shows, Twitter beefs and lyrics about slut-shaming. But they're becoming just as powerful as Cyber, and are winning in Iceland's bizarrely healthy native hip hop scene. Read the full story at peoplewemet.org (link in bio), with photography by @riverthompson
Giovanni Bolliccia is the barman at Lil's Saloon, in the Californian ghost town of Calico, which was once a prominent silver mining town but today is more like a Wild West-themed area of Disneyland (it was taken over in the 1950s by berry and theme park magnate Walter Knott). Still, in the dusty saloon, with its poker tables and kitsch Wild West paintings, the politics are as real as the history. "If Donald Trump came here, I'd pour him a beer," Giovanni informs us. "If Hillary came... rat poison!" Read the full story at peoplewemet.org (link in bio), with photography by @mylsespritchard
Meet Lord Humungus, aka Jim the Pool Guy, and also known as Dog Tank, or simply Tank. Once a year, when Jim Dorsey isn't servicing swimming pools in New Jersey, he switches off his phone, gets into costume and comes to the Wasteland Weekend post-apocalyptic festival as Lord Humungus, the chief bad guy in 1981's Mad Max 2: Road Warrior. In 2010, he was just another attendee, but everyone told him he had the physique to be Humungus. "So, at 40, I got in the shape of my life and became Humungus," he says in his deep New Jersey drawl. "People went nuts for it." Jim had a colourful life pre-Humungus, too—he was the tour manager for the Misfits and has many tales of riots at gigs, especially in Chile, for some reason. He was also a wrestler for a while, and now filmmaker Faye Murman is trying to raise funds on Kickstarter to make a film about his life. Read the full story at peoplewemet.org (link in bio), with photography by @mylespritchard
%d bloggers like this: