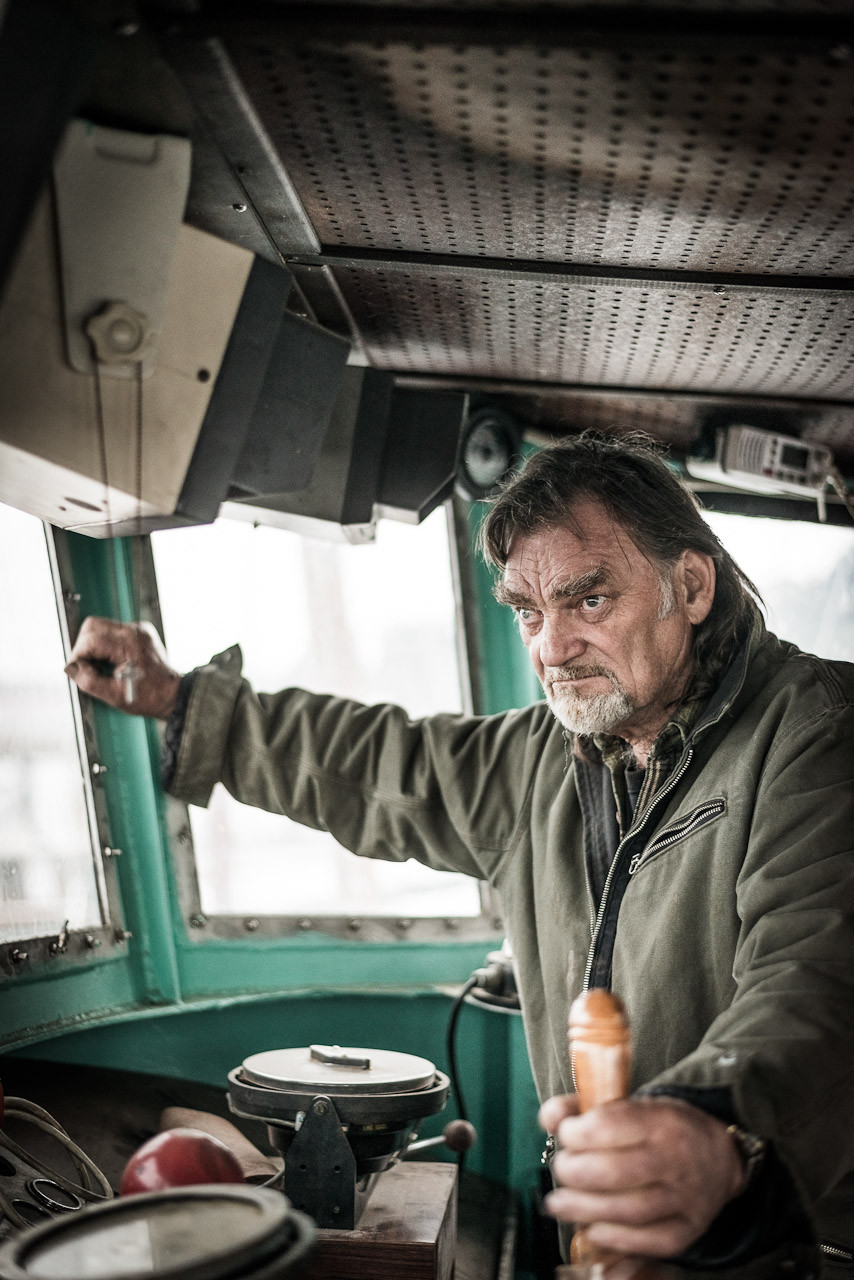 I interviewed Dave Densmore over the phone in December 2016, for a story about the Fisherpoets Gathering in Astoria, Oregon. The photos were taken by Malte Jaeger on an earlier trip to Astoria.

Stories aren’t exactly in short supply at the Fisherpoets Gathering in Astoria, Oregon, or so I’m told. In the bars around this gentrifying blue-collar town, a hundred or so men and women – all of whom have had commercial fishing experience – read poetry, sing songs and tell tall tales of life on the seas.

But few, surely, can hope to match the storytelling chops of “Dangerous” Dave Densmore – who was the youngest king crab skipper on the Bering Sea, off Alaska, at 23; who survived four days on a tiny life raft in a violent storm in 1971; and whose father and son died in the same fishing accident in 1985. Dave has some stories.

Today, he’s speaking to me from the 54-foot ketch he lives on in in Astoria, and on which he’s planning to set sail around the world with his partner. “I guess I’m just happier on the ocean,” he says. “On land, it gets complicated – people, relationships, status, all that stuff. Out there, none of that matters so much. You’re in nature’s pocket, and you realise that in all that beauty and power, your shit doesn’t mean much.”

Born in the commercial fishing hub of Kodiak, Alaska, Dave bought his first boat at 13, and became a king crab skipper at 23, a preposterously young age in a game where respect is all. But, hearing about his time on that life raft, which is the subject of one of his best-known poems, you get a sense of the man that Dave was, and is.

“We’d been out fishing king crab, not far from the shore, when the boat caught fire and we had to jump ship. Having got on the life raft, we watched, helplessly, as a storm rose up, taking us further and further out to sea.

“This was before survival suits were invented, and we were freezing – but I didn’t allow myself to think we’d die on that raft, bobbing around in huge waves, with driving snow. On the first night, I told my guys the rules: We weren’t gonna talk about food, water, wives, girlfriends. It was just the four of us, the raft and the here and now. We were going to tough it out, and we were going to live.”

Eventually, four long nights later, fate played a hand. A Japanese trawler came past and flipped the raft. “If they hadn’t seen us and stopped, that would have been that,” says Dave. But the sailors heard the screams and did stop, dragging the shivering Alaskan fishermen onboard. Not speaking a word, the Japanese seamen got to work instantly, taking to turns to massage Dave and his crews’ feet with Savlon and warm water.

“Without them,” says Dave, “I was told I would have lost both feet. It was a miracle that all of my crew survived without losing any parts of their bodies.”

But if that didn’t break Dave, what happened on June 28th, 1985, would have broken most men. Dave had been through a stint running a salmon trawler in Oregon and Washington, and a divorce. He’d moved back to Kodiak Island with his new partner, Pat, and his son Skeeter, in 1980.

June 28th, 1985, was Skeeter’s 14th birthday. That day the boy went out with Dave’s father on a skiff in Uyak Bay, Kodiak. Both were experienced on boats. Neither came back.

“I lost everything that day,” says Dave. “It was mighty dark for a couple years, and to this day there isn’t a day that I don’t think about my son and the life he might have had. But, one day, I wrote a poem about my boy, and I realised that it helped. It was the start of a long road to coming to terms with what had happened.”

He read ‘Skeeter’s Song’ in public for the first time at the Fisherpoets Gathering, which was first held in the winter 1998. “There was a couple in the audience who’d lost their son and they weren’t doing too well. It meant a lot that I wasn’t just helping myself, but that the poetry meant something to other people, too. Of course, it still hurts – but you can find a silver lining if you look hard enough.”

As for the idea of fishermen writing poetry, to Dave it makes perfect sense. “There’s real poetry in fishing,” he says. “You can’t live that close to nature without seeing the spiritual side of it. We see miracles out there all the time, whether you’re talking about the flight or a bird or a whale planing. I’m not a religious man, but I can see the spirituality in it all.”

You can’t live that close to nature without seeing the spiritual side of it.

He also sees poetry as a way to change perceptions about fishermen and commercial fishing. “It’s something I love and have given my life to, but as an industry, it sometimes gets a bad rap. I want to show people that there’s a human story behind that piece of fish in Styrofoam: blood, sweat and tears; a guy who missed Christmas with his family; a guy who lost a finger, or more.”

Dave talks about preserving the oceans, and making sure that future generations can experience the raw beauty that he loves so much. He talks about his plans for sailing the world. His story, it turns out, isn’t really one of suffering and loss, or how tough the life of a fisherman is. It’s one of beauty, and hope.

Read Dave Densmore’s poem about his son here, and his poem about surviving on the life raft here. Read more about the Astoria Fisherpoets Gathering here.

Nikka Myren Grønning has three words of English, but they're pretty good ones: "I love you". When we met in 2016, 99-year-old Nikka chatted away despite severe translation issues, while using a traditional mould to make her crisp signature wafers, which they serve at the super-cool Juvet Landscape Hotel up the road. She's lived in the same farmhouse in the Valldal Valley in central Norway since the War, when she would sneak supplies out to Russian soldiers who were fleeing the Nazis. She's since hit three figures, becoming a minor celebrity in Norway for her baking recipes—and I can only assume she's still a badass with a cheeky glint in her eye. Read the full story at peoplewemet.org (link in bio), with photography by @riverthompson
When @timewhitephoto and I met Santa in 2014, at the Kakslauttanen Arctic Resort in Finnish Lapland, he was having a tricky time- Mrs Claus was shopping in the Maldives, and he was living on pizza and coffee, which weren't helping his insomnia. Still, Santa has some proper tricks up his baggy red sleeve. His elves can make iPads using local gold and magic powder, and he can remember every kid he's ever met- including Tim, whom met him in an Essex department store in the 1970s. Read the full story at peoplewemet.org (link in bio). And have a very merry Christmas, all.
Stories aren’t exactly in short supply at the Fisherpoets Gathering in Astoria, Oregon, when a hundred or so commercial fishermen read poetry, sing songs and tell tall tales of life on the seas. But few, surely, can hope to match the storytelling chops of “Dangerous” Dave Densmore – who was the youngest king crab skipper on the Bering Sea, off Alaska, at 23; who survived four days on a tiny life raft in a violent storm in 1971; and whose father and son died in the same fishing accident in 1985. Dave has some stories. Read mine about him at @peoplewemet (link in bio), with photography by @maltejaeger.de
It's fair to say that Icelandic hip hop trio Cyber like to talk – about trampolines, cheap fast food and what Icelandic teenagers really get up to in the Blue Lagoon; but also about stuff they care about, like gender equality and good music. The trio got together as part of the Reykjavik's Daughter hip hop collective, an all-girl juggernaut of provocative live shows, Twitter beefs and lyrics about slut-shaming. But they're becoming just as powerful as Cyber, and are winning in Iceland's bizarrely healthy native hip hop scene. Read the full story at peoplewemet.org (link in bio), with photography by @riverthompson
Giovanni Bolliccia is the barman at Lil's Saloon, in the Californian ghost town of Calico, which was once a prominent silver mining town but today is more like a Wild West-themed area of Disneyland (it was taken over in the 1950s by berry and theme park magnate Walter Knott). Still, in the dusty saloon, with its poker tables and kitsch Wild West paintings, the politics are as real as the history. "If Donald Trump came here, I'd pour him a beer," Giovanni informs us. "If Hillary came... rat poison!" Read the full story at peoplewemet.org (link in bio), with photography by @mylsespritchard
Meet Lord Humungus, aka Jim the Pool Guy, and also known as Dog Tank, or simply Tank. Once a year, when Jim Dorsey isn't servicing swimming pools in New Jersey, he switches off his phone, gets into costume and comes to the Wasteland Weekend post-apocalyptic festival as Lord Humungus, the chief bad guy in 1981's Mad Max 2: Road Warrior. In 2010, he was just another attendee, but everyone told him he had the physique to be Humungus. "So, at 40, I got in the shape of my life and became Humungus," he says in his deep New Jersey drawl. "People went nuts for it." Jim had a colourful life pre-Humungus, too—he was the tour manager for the Misfits and has many tales of riots at gigs, especially in Chile, for some reason. He was also a wrestler for a while, and now filmmaker Faye Murman is trying to raise funds on Kickstarter to make a film about his life. Read the full story at peoplewemet.org (link in bio), with photography by @mylespritchard
%d bloggers like this: